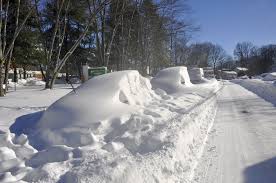 After withstanding big snow, ice, high winds and flooding from Winter Storm Jonas, cities in the mid-Atlantic and Northeast have been working to get back to normal this week.

Jonas was the fourth most powerful snowstorm to hit the Northeast in at least 66 years, the National Oceanic and Atmospheric Administration announced Thursday. At least 50 people died in the storm, a quarter of a million customers lost power and hundreds of crashes were reported.

The blizzard affected 102.8 million people and covered about 434,000 square miles in 26 states, NOAA spokeswoman Maureen O’Leary said. Almost 24 million people saw more than 20 inches of snow and 1.5 million got more than 30 inches, according to National Weather Service meteorologist Paul Kocin. The heaviest unofficial report was in a rural area of West Virginia, not far from Harpers Ferry, with 42 inches, and even Florida saw some flurries.

Wintry precipitation spelled trouble for airlines, causing the cancelation of more than 10,000 flights. It also wreaked havoc at ground level, creating snowy conditions that caused a massive gridlock that trapped hundreds of vehicles on the Pennsylvania Turnpike. Public transportation in Washington D.C., New York and New Jersey were shut down, and travel bans were implemented by city officials in an effort to keep people off the roads.