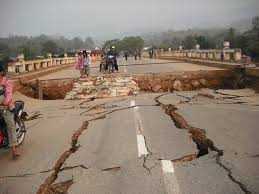 A powerful 6.8-magnitude earthquake has hit central Myanmar, the US Geological Survey has said, severely damaging ancient temples at the old city of Bagan and killing one person.

The site, which is often compared to Cambodia’s Angkor Wat, holds more than 2,500 temples and pagodas, some of them centuries old.

The earthquake was so intense that it was felt in Bangkok, about 620 miles (1,000km) away. To the west, in the Indian city of Kolkata, buildings shook and the underground railway was temporarily shut down to prepare for aftershocks.

The tremors were also felt in Bangladesh, which borders Myanmar, where local media reported that at least 20 people were injured as panicked workers fled a building.

“A 22-year-old man was killed when a nearby building collapsed during the earthquake,” he said, adding that a woman was also injured.

A visiting tourist, who identified himself online as a Canadian living in Japan, posted what appeared to be live footage of a badly damaged temple in Bagan, with part of its facade a tumble of red bricks.

He said other foreigners he had met were inside one of the temples during the earthquake but had managed to escape.

Vincent Panzani, who works for Save the Children in Pakoku, 40 miles from the epicentre, said the city felt “quite heavy shaking for about 10 seconds and [everyone] started to evacuate the building when there was another strong tremor”.

“Most of the reports of damage have been to the pagodas in the area with dozens impacted. There have also been reports of damage to smaller, more basic buildings including a collapsed wall and a destroyed roof. Several of our staff who have lived in this part of Myanmar their whole lives said it was the strongest earthquake they’ve ever felt,” he added.

Bagan is located on an active earthquake zone and regularly experiences tremors, but not of this magnitude.

Many temples that have been destroyed in previous earthquakes have been completely rebuilt, including Bupaya, a round gold-gilded pagoda that tumbled into the Ayeyarwaddy river during a 1975 earthquake.

Earthquakes are relatively common in Myanmar, a meeting point for the Indo-Australian and Eurasian plates, although the country has not experienced a major quake since 2012. The last one struck in a nearby region in April and caused minor damage but no casualties.