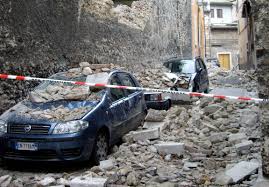 ROME — A powerful earthquake toppled homes, churches, and shops in a wide swath of medieval towns in central Italy Wednesday, killing at least 247 people and injuring hundreds of others, according to Italy’s civil protection agency.

Dozens more were missing or feared dead from the magnitude-6.2 earthquake and a series of aftershocks that jolted Umbria, Lazio and Le Marche, three regions 80 to 100 miles northeast of Rome.

Rescue teams using bulldozers, and aided by townspeople with their bare hands, were still poring through the piles of rock, metal, and wood late Wednesday looking for possible survivors. Police near the town of Ascoli said they could hear cries for help from under the rubble but lacked the heavy equipment to move the rocks, according to RAI radio.