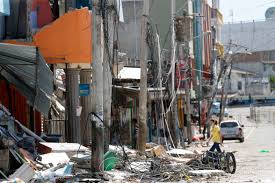 (CNN)Rescue crews searched desperately through rubble for survivors of a magnitude-7.8 earthquake that struck coastal Ecuador.

The death toll has soared to 272, Ecuador’s President Rafael Correa said Sunday evening. That number is expected to rise as rescue teams dig through the rubble, he said.
Earlier that day, Vice President Jorge Glas had estimated that at least 2,527 people were injured.
The hardest-hit area was the coastal Manabi Province, where about 200 people died, said Ricardo Peñaherrera of Ecuador’s national emergency management office. The cities of Manta, Portoviejo and Pedernales, a tourist destination, saw the most devastation but the damage was widespread throughout the country.
“The first hours are crucial,” Correa said. “We’re finding signs of life in the rubble. We’re giving this priority. After, we’ll work to find and recover bodies.”
Donate Today