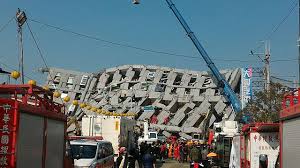 The last trapped person was rescued alive on Saturday afternoon, the city’s disaster response office said.
A total of 289 people were rescued, 96 people remain in hospital.
Most of the fatalities and injuries came from the collapse of the Weiguan Golden Dragon high-rise tower in Tainan, the response center said. Aerial images in the immediate aftermath of the temblor showed the Weiguan Golden Dragon tower transformed into rubble. Structures around it remained intact.

Rescuers found tin cans packed into the collapsed walls of the high-rise.

“There are so many other older buildings in Tainan that are still standing. Why was it only this building that was completely destroyed?” asked Wang Xingyou, a city cab driver.
Three people, all former executives of the company that built the collapsed apartment building, were arrested Tuesday and face charges of professional negligence resulting in death.
Donate Today