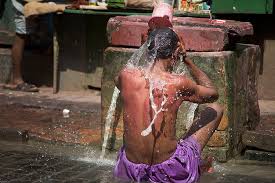 Heat-related conditions, including dehydration and heat stroke, killed more than 2,500 people since mid-April in the southern Indian states of Andhra Pradesh and Telangana. Officials urged people to stay indoors and remain hydrated, such as this man in Allahabad was doing on May 31, 2015.

In June, the worst heat wave in at least a decade hit southern Pakistan, particularly the port city of Karachi. More than 830 people died as temperatures reached as high as 45 C. Karachi’s inefficient power grid and the shortage of potable water were blamed for worsening the situation. On the worst days, people in the city of 20 million tried to get water from broken pipes.