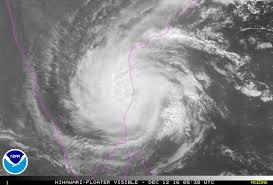 Eighteen people were killed in six districts of Tamil Nadu in rain-related incidents linked to Cyclone Vardah that crossed the coast, as Chief Minister O Panneerselvam held a meeting of top officials today to speed up work to ensure return of normalcy in storm-hit regions. The government said it is taking all steps to ensure that the jammed mobile phone networks are restored and a meeting of telecom operators and officials was held.\

He said five each were killed in Chennai and Tiruvallur districts. Four persons died in Kancheepuram district, one each in Villupuram and Nagapattinam districts and two in Tiruvannamali district, the officials added. All these deaths were in the revenue districts.

He said as expected districts like Tiruvannamalai, Vellore and the Western belt of Dharmapuri too witnessed heavy rains that began with the commencement of the cyclone Vardah’s landfall.

“Chief Minister Panneerselvam held a meeting of top officials today. Our priority is to restore power supply which has been hit due to fallen trees, clear clogged roads which have fallen trees,” the official said.

He said traffic has already been cleared in all arterial roads in all of the affected districts and efforts were now on to clear the roads and restore power in other neighborhoods.

“TANGEDO (State-run power undertaking) itself has deployed about 4,000 personnel to ensure quick restoration of power supply,” he said.

Personnel from multiple government departments including Revenue, Police, Fisheries, Animal Husbandry and other state agencies from Ariyalur, Perambalur, Tiruvallur, Cuddalore, Salem and Thanjavur districts were being deployed to handle the situation in the cyclone-hit regions, he said.

On the number of people now housed in relief centers, he said more than 13,000 people are being sheltered in over 100 centers. All vulnerable areas were identified in advance and teams of officials are on the job, he said.

To a question on clogged mobile phone networks, he said a meeting of telecom officials and operators was being held to address the situation and ensure the expeditious return of normalcy.